One by one, students in the early lunch crowd Wednesday at Westside High School stepped up to the cashier's table, set down their trays and placed an index finger on a small scanner. Once their purchases were entered into their accounts, they strolled off to join their friends at the big round lunch tables, with no more remembering or fumbling for student ID cards.

Westside went live with its new biometric finger scanning identification system Tuesday on lunch lines at both its high school and middle school. The district needed new software to support the lunch program because the old system was no longer supported by its maker, said Diane Zipay, the district's nutrition services director.

So Westside decided to add the biometric system. Students' fingers were scanned last month as part of a registration process. The computer software creates a template from the lines and swirls on the fingertip but does not retain an image of the fingerprint. The template is converted to a binary number, which is encrypted and stored. It can't be used by law enforcement agencies. "That's extremely important to us, that we protect children's identities," Zipay said.

Westside appears to be the only public district in the metropolitan area to use the system, although at least one other district in the state - Norris Public Schools south of Lincoln - has installed it. Omaha's Creighton Prep, a private boys' school, is in its third year with the system. Similar systems are used in banks and medical offices.

Zipay said the aim is to improve security for student accounts, eliminate clerical errors and give students an easier way to access their account. Previously, students had to show a student ID for each purchase. Students who lost their ID had to go to the office to get a new one, leaving them little time to eat. The new system also prevents one student from using another's account and provides greater anonymity for students who qualify for free or reduced-price meals.

At the high school, the new system, along with changes in federal snack rules, means students now can have just one account for the main cafeteria and the convenience store rather than two separate ones.  She said that change has been popular with parents, who also can see what students are purchasing through the online accounts.

that what's charged to them

is truly eaten by their child.

The district sent letters to parents before registration began notifying them of the change and explaining the system. About 20 families, and a few individual high school students, chose to opt out, Zipay said. About 3,000 students attend the two schools.

John Skretta, superintendent of the Norris School District in Firth, Nebraska, said the technology is reliable and has gotten more so over the several years the district has used it. The district has been very pleased with it. "A parent feels pretty confident that what's charged to them was truly eaten by their child," he said.

Olivia Wing, a Westside freshman, said her mom likes the combined accounts. She's glad she doesn't have to produce her ID every day. She's had to get two replacements so far this year. "You don't have to worry about forgetting," she said. 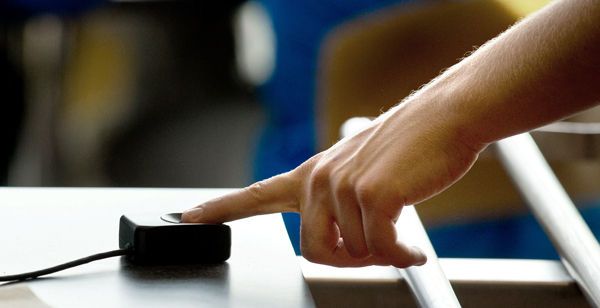 The new software system, Zipay said, cost about $46,000. Adding the biometric piece cost an additional $9,000. At the elementary level, cashiers pull up a class photo as each group lines up and touch each child's picture as they go through the line to note that he or she is eating that day.

At two schools with grab-and-go breakfast programs, the cashiers use tablet computers to log those eating the morning meal. The new system will allow the district to expand grab-and­ go options in the future or even set up a grill outside on a nice day.